Palazzo Zevallos Stigliano, the Museum of Intesa Sanpaolo in Naples, is located in the heart of Naples, in the main thoroughfare of via Toledo. Its construction began in 1635 for the wealthy Spanish merchant Giovanni Zevallos, who became Duke of Ostuni in 1639. The residence was sold around 1653 to a Flemish merchant, Giovanni Vandeneynden, who gathered an extraordinary collection of art therein. In 1688, because as a result of dynastic and nuptial events, the Palace passed on to a branch of one of the most influential families of both Roman and Neapolitan environments aristocracy, the Colonnas. For several decades, the sumptuous residence was at the center of the aristocratic city life by hosting, on various occasions, the Neapolitan nobility and even the vice-regal family itself.

In 1898, Banca Commerciale Italiana began its campaign to acquire the palace, which was completed in 1920. The architect Luigi Platania was asked to adapt the building to its new functions. Thus the large 17th century courtyard was transformed into the audience room, the mezzanine floor was turned into Art Nouveau-style balconies, the entire cavity was covered with a glass ceiling in a combination of Floral and Belle Epoque style. The selection of old paintings shown in the Gallerie of Palazzo Zevallos Stigliano offers a brief outline of the major events in the history of Neapolitan painting during the 17th and the 19th centuries, from the tragic Martyrdom of Saint Ursula, Caravaggio’s last masterpiece. Finally, Gemito’s works constitute a collection of outstanding quality, and one of the most important assemblages of this artist. Terracotta works, bronzes and drawings from the 1870s through the 1920s testify to his extraordinary artistic career

The magnificent hall of Palazzo Zevallos Stigliano can hold events accommodating up to ninety-nine guests. The hall can be the setting for meetings, conferences, performances, and concerts accompanied by formal or stand-up dinner service. The location is a unique space and is the result of a masterful restoration that was carried out in the 1920s, when the palazzo was entirely converted into the seat of the Banca Commerciale Italiana in Naples. The hall in particular is where once was the building’s original courtyard, now covered by a monumental polychrome glass roofing with Belle Époque Floral-style decorations. Precious ornamentation and marble bays add richness to the hall with an interesting juxtaposition of trachyte and grey tuff. The old bank counters complete with their brass lamps still run along the perimeter of the hall adding an original note to the space. 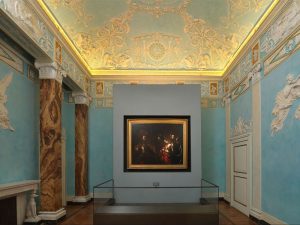 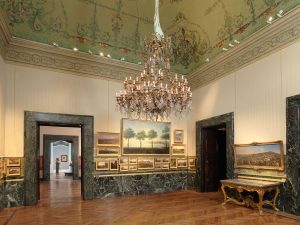 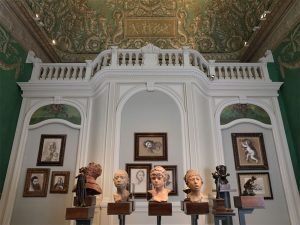 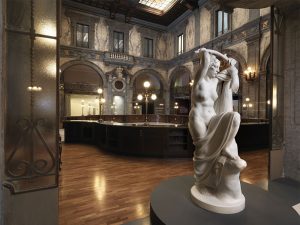 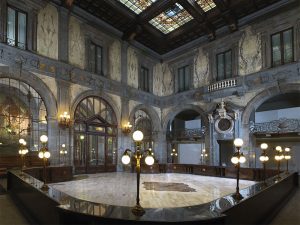 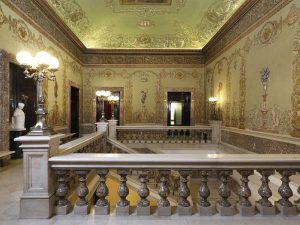