The Museum, founded by Gaetano Filangieri Prince of Satriano (1824-1892), was open to the public in 1888. Palazzo Como, which houses the Museum, dates back to the 15th century, and it is one of the few examples of Renaissance architecture in Naples. Palazzo Como, before it became the Filangieri Museum, had been moved twenty meters back, in order to leave space for the enlargement of via Duomo, so it was called the “Walking Palace”.

The Museum houses about 3000 works of art: paintings, sculptures, weapons, china, majolica, furniture. They are exhibited according to a criterion which is typical of the 19th century, that is they follow a chronological, typological or sometimes just esthetical display. The visit starts from Carlo Filangieri Hall, where the vault is coated with mosaics with the family coat of arms and the names of the most important members of the family. Mosaics realized by Salviati Atelier of Venice. On the walls there are on display Chinese stick-weapons in racks, oriental armors on dummies, weapons and horse harness from 15th to 19th century in showcases. The collection of marble, terracotta and bronze sculptures includes mainly bust portraits dating back to 19th century with masterpieces by Francesco Jerace and Tito Angelini. The extraordinary spiral staircase leads to the Agata Hall after the founder’s mother, Agata Moncada di Paternò, where are on display paintings, china and several artifacts of applied arts, nicely exhibited in sophisticated inlaid walnut showcases. The precious floor made up of majolica was designed by Filippo Palizzi and realized by the M. S. O. - Museo Scuola Officina. The picture gallery includes paintings from 16th to 19th century, which show the production of several painting schools. Masterpieces of the 17th century Neapolitan school with paintings by Jusepe de Ribera, Luca Giordano, Andrea Vaccaro, Mattia Preti. Along the upper passageway there are twenty-four showcases with china, majolica and ceramic artifacts from the most important European schools, with a rich documentation of the production from the Real Fabbrica of Capodimonte. The elegant and rich library tops the visit. The Museum was seriously damaged during the war, but it still shows all the great charm and warmth of its former setting. 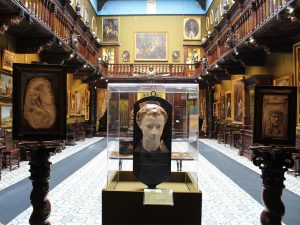 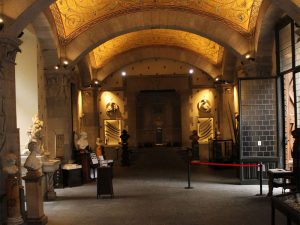 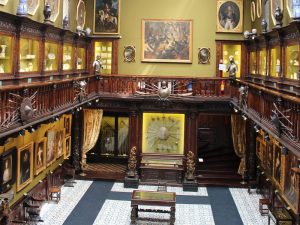